Moyamoya was first described in 1957 by the Japanese Takeuchi and Shimizu. The disease is more common in Asia (especially in Japan and Korea), with an incidence of about 0.35/100.000 residents / year. There are no reliable data for Europe, but it is estimated that the disease is about 10x less frequent than mentioned above. The name "Moyamoya" is Japanese and means "puff of smoke", which is due to the diffuse appearance of fine collateral vessels in cerebral angiography.

The nomenclature can be summarized as the umbrella term of Moyamoya angiopathy, whereat Moyamoya disease is defined by bilateral Moyamoya findings. If there is another known underlying disease (e.g. neurofibromatosis, Down’s syndrome, multiple sclerosis) it is called Moyamoya syndrome. 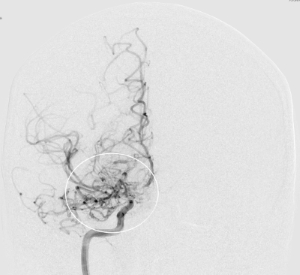 The occurrence of first symptoms of the disease shows two accumulations, at the age below 10 years, as well as in adults between 35-40 years. Overall, females are affected almost twice as often as males. There are familial cases of Moyamoya disease, but these are extremely rare in Europeans and occur in less than 10% of all patients.

On the left-hand an image with a cerebral angiography, where thin collaterals (cloud-like image) can be seen around the stenotic part at the end of the internal carotid artery

The disease occurs only in the basal cerebral arteries (Circle of Willis) and does not extend to the more peripheral cerebral vessels. Because the brain has six main vascular territories (anterior, middle and posterior cerebral artery on each side), up to 6 vascular territories can be affected by the disease. Which brain areas are definitely involved, can only be seen after cerebral angiography (catheter imaging of the cerebral vessels).

Moyamoya might have a chronic course in patients which have been suffering from the disease for many years and the body has self-assimilated the blood flow through many fine collaterals without having had relevant strokes. In patients with acute disease, there is a relatively rapid progression of a newly developing stenosis of the affected vessel. This results in these patients not being able to develop sufficient collaterals in this short course of time and then experiencing a stroke. In order to differentiate chronic from acute disease, we have established a special high-resolution MR imaging protocol, which relatively reliably indicates the current state of the disease. Thus, one can better estimate the risk of further rapid deterioration and initiate further steps accordingly.